Nils Amadeus Lange (* 1989 Cologne, Germany) works as an artist, performer and choreographer in Zurich. After studying theatre at the Hochschule der Künste Bern (HKB), he expanded his theatre practice with a focus on dance and performance and developed numerous projects in collaboration with visual artists*.

At the centre of his practice is the body, which functions as a means of deconstructing conventions, social models and gender stereotypes.

Recent years have seen the emergence of not only his own work, but also various collaborations. Among other works, the online series and stagepiece „body and freedom“ was developed in collaboration with Florentina Holzinger, Vincent Riebeek, Annina Machaz and Manuel Scheiwiller, which premiered at Tanzhaus Zürich. (Further performances: ImPuls Tanz Wien, Liste Basel, Haus der Berliner Festspiele). At the lithuanian pavilion at the Venice Biennale 2015, he was part of the young boy dancing group, a company with open authorship. Furthermore, he teaches and gives workshops (FHNW Basel, SNDO Amsterdam, HKB Bern, ZHDK Zürich amongst others). 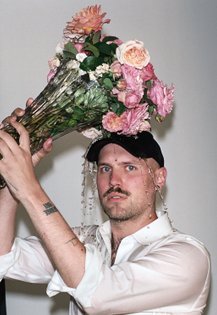